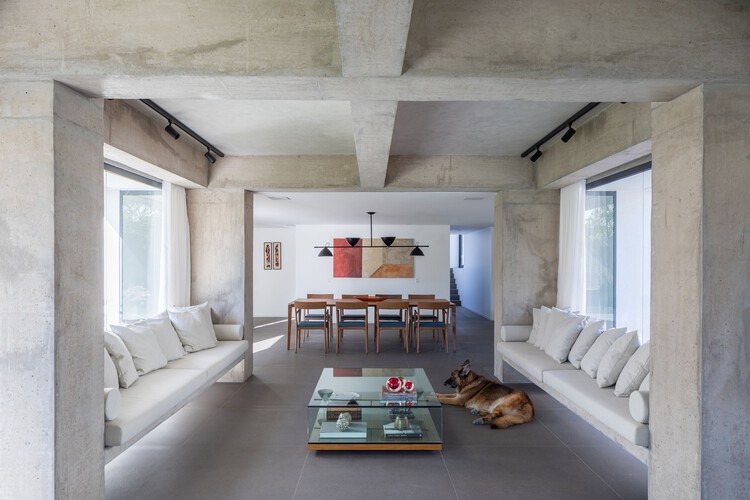 Text description provided by the architects. The renovation project of this house built in the 1980s kept and complemented the concrete structure of the lower floor and part of the structure of the existing pool. The roof slab on the upper floor was demolished and replaced by a new one, which made it possible to increase the total area, raise the ceiling height and reconfigure the internal layout.

In the original project, the garage was the only room with direct access to the pool on the lowest level of the plot. The renovation turned this level into the social area of the new house, with the living room, dining room, and veranda. We moved the garage and service area to the front of the plot.

The rooms in the original project were Northwest facing, which caused excessive exposure to the sun throughout the day. In Brasília, its solar orientation requires attention. In addition, the existing roof limited the ceiling height to 225 cm. We reversed the position of the ensuite rooms and repositioned the windows of the rooms to the Southeast, better orientation in Brasília. We also enlarged the rooms and created a balcony for the master suite, facing the back of the house.

Most of the concrete structure that remained after the demolition had to be reinforced to be reused on the first floor of the new project. In addition, concrete reinforcement in the structure was made to create fixed sofas and seats on the ground floor. The highest roof is entirely new.

The reuse of the structure results in a composition of new and old parts, where misalignments are visible, as well as the “oversized” appearance of some beams and pillars, caused by reinforcement. On the lower floor, we decided to leave only part of the structure of pillars and beams exposed on the ceiling of the room, as a visible trace of the intervention we made on an existing building. In addition, the inverted roof beams were also exposed.